There's lots of talk about unschooling for gifted students, and definitely there is an aspect of unschooling that is ideal for this type of learner. Even with the teenlet, you can see it happen - when something clicks just in the right interest area, when he discovers something he wants to pursue more, when he jumps in and is trying to figure out the answer to a question - that is when unschooling is at its best. 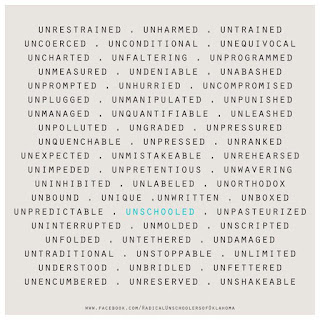 Our version of homeschooling is definitely a hybrid. The teenlet isn't all that self-motivated, so we haven't gone fully unschooling, but he does love to learn and every so often will go off on a tangent that leaves us (his parents) standing agape, utterly startled at his passion. But mostly he just does the minimum amount of work with which he can get away.

There is something about unschooling that just seems so right for this kind of learner. Learning is organic for him - it just happens. If I didn't know better, I might think he was sleeping with textbooks under his pillow and gaining all that knowledge by osmosis. One day he doesn't know something and the next he does. He comes out with completely random and bizarre knowledge and I have no idea from where it came.

These moments remind me of the time, when he was a toddler not even 1-1/2 years old, on an airplane. The elementary-aged kid who was sitting in the seat in front of the then-toddler teenlet had turned around and was entertaining him with funny faces and talking to him. So, as any good parent would do when faced with not having to entertain their child for a few moments, I pulled out my book. I have no idea how it started, but pretty soon I was aware of this older kid saying,
"so what comes after one?"
"TWO!"
"what comes after two?"
"FWEE!"
"after three?"
"FOUR!"
...and so on all the way to seven.

I had no idea how he'd learned that. None. At all. He'd never watched Sesame Street. I hadn't been playing with flash cards or trying to teach him numbers. I wasn't even sure how he'd been exposed to the idea of numbers. Daddy is a numbers-guy, but I was pretty sure he hadn't started trying to teach him that either. We were both flabbergasted. (And yes, that's a very cool word that I really enjoyed typing right there.) Something in him had learnt that without anyone ever teaching it to him.

He did the same with algebra. In kindergarten. DH asked him to solve a simple, two-digit addition problem. The 5yo teenlet looked at him for a little while, then told him the answer. DH asked how he did it - and the teenlet explained how he had solved for x (without using those terms, of course) - something we'd never taught him. He figured it out on his own. And darn it if the kid isn't STILL doing algebra in his head even though we're far past the level that most people start using calculators to help them with the computations.

So, it's very tempting to let him unschool. He seems to learn more and better that way. But there is still a part of me that wants to be sure he's got most of his basic subjects covered, which won't happen if we let him loose completely. So, we are creating a hybrid system. He's got most of his academic requirements for high school completed, and only has bazillion or so elective credits to work on. So he continues to work on core math and science subjects, but with lots of freedom in his social studies and writing curricula, adding in other subjects of interest (like computer science) as he wants to learn them. And we find that, as he gains more freedom in his learning, he gains more confidence and more motivation as well. 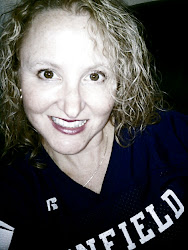